Hello and welcome to my blog. I’m Dr. Doug Knueven but I go by Dr. Doug for reasons that become obvious when you try to pronounce my last name. (By the way, it is pronounced “KNEEVEN” – you pronounce all the letters except the “U”) I was raised in a small suburb of Cincinnati named Mt. Healthy. This town name has taken on new meaning throughout my life.

When I graduated from The Ohio State College of Veterinary Medicine in 1987, my idea of health revolved around the mechanistic, Western model of medicine where there is a drug or surgery for just about every condition (never mind the side effects and surgical risks). After a few years in practice I realized that things didn’t always go the way the text books said it would. I realized there had to be more to health and healing than what I was taught in vet school. This realization started me on my journey into holistic medicine.

I started with veterinary acupuncture as I had an interest in this therapy that was sparked by an after-hours lecture in vet school. After seeing the benefits of this strange healing modality, I completed courses in homeopathy, Chinese herbal medicine and chiropractic. I also joined the American Holistic Medical Association and through their conferences, continue to learn more about holistic pet health. Today, for me the word health is more about lifestyle and less about what you go to the doctor to get.

As excited as I am about alternative medicine, I have not thrown the baby out with the bath water. I do see the value of Western medicine for certain situations. I practice integrative veterinary medicine which involves the use of the most appropriate treatment for the individual animal. As an integrative medicine practitioner I have more tools in my kit to treat the many patients I see.

Along the way I also realized that any given patient was not going to heal if they were not being fed properly. This led me into my own research into animal nutrition. I soon abandoned much of what I had been taught about nutrition in veterinary school, as that information is highly influenced by the major pet food companies. From my research and decades of experience it is obvious to me that pets benefit from an evolution-based diet rather than the starch-rich, highly processed convenience pet foods most pet caregivers currently feed. Animals simply cannot be healthy if their bodies are not provided the raw materials and nutritional signals that are needed.

The longer I have practiced veterinary medicine, the more convinced I am of the value of the Holistic-Integrative approach to pet health care. My passion for pets and for true health (physical, mental and spiritual) is what this weekly blog is all about. Together we will explore pet health topics.

This weekly blog will cover topics in holistic veterinary medicine as well as current events in the veterinary world. I hope to open a dialog with pet caregivers and veterinarians about these issues. Much of what I say may be controversial to some readers. I am all for healthy criticism and I love to hear different points of view. I do not claim to know it all and I plan to learn from the people who participate in the discussion.

Have you or your pet had experience with holistic medicine? Click on the title above and join the conversation. Don’t forget to sign up on the right for blog notifications.

Is Your Cat’s Food Killing Her? 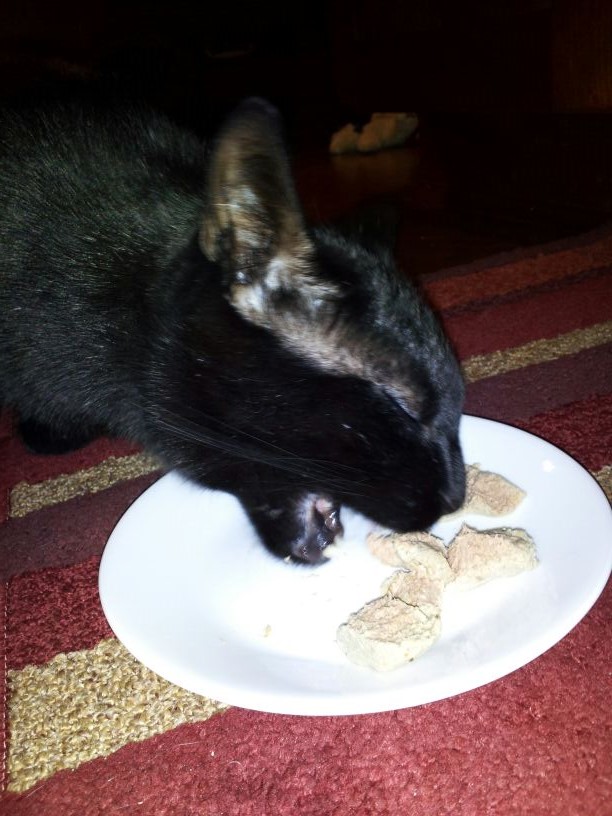 A study1 published in the January 15 issue of the Journal of the American Veterinary Medical Association evaluated the thiamine (Vitamin B1) content of 45 brands of canned cat food. In all 90 canned cat foods were evaluated – one fish and one non-fish flavor from each of the 45 brands. Disturbingly the study found that, “Thiamine concentrations in a substantial percentage of commercially available canned foods was below the amount recommended for adult cats.”

The fact that thiamine is a vitamin means it is essential for life AND must be obtained from the diet. Thiamine is involved in many cellular processes including the breakdown of sugars and amino acids. It is also used by the body to produce certain neurotransmitters (molecules that facilitate nervous system communication).

Thiamine is found in many foods including most meats, liver, fish, certain vegetables, whole grains, and brewer’s yeast. According to this study, 50% – 90% of a raw ingredient’s thiamine content can be lost due to the high-heat processing that pets foods are subject to. Furthermore, “alkalinizing gelling agents” can further decrease the bioavailability of this nutrient. Because of these issues, pet food manufacturers add back synthetic thiamine after processing – but apparently not enough in some cases.

Low thiamine levels were more common for pate foods than for non-pate diets. The researchers speculate this discrepancy is due to the different consistencies of these food types and how that affects the heat distribution.  Also, low thiamine levels were more common in foods made by small pet food manufacturers than for larger companies. Presumably the larger pet food companies have more money to enact stricter quality control.

This study was prompted by the fact that in the past five years there have been five voluntary pet food recalls in the US involving nine brands of cat food due to low thiamine content. The foods tested are still on the market and are certified as being 100% complete and balanced according to Association of American Feed Control Officials (AAFCO) standards.

Here are a couple of takeaways from this study. First of all, heat processing of food destroys many essential nutrients – one of which is thiamine. While pet food companies attempt to correct deficiencies, they sometimes fall short. Not only are known nutrients sometimes deficient but the thousands of phytochemicals found in whole foods are lost and never replaced. The second lesson is that a significant number of foods that are deemed complete and balanced are not.

In my opinion, this research highlights just one example of why the best foods for cats and dogs are diets that mimic what they evolved eating. The ancestors of our pets did not consume processed foods. In my experience, most dogs and cats truly thrive on balanced raw diet.

Have you considered feeding raw food to your pet?

So, what is holistic medicine?

Holistic Health – Holistic Health is actually an approach to life. Rather than focusing on illness or specific parts of the body, this ancient approach to health considers the whole person and how he or she interacts with his or her environment. It emphasizes the connection of mind, body, and spirit.
AHHA President, Suzan Walte

Complementary and Alternative Veterinary Medicine – A heterogeneous group of preventive, diagnostic, and therapeutic philosophies and practices. The theoretical bases and techniques of CAVM may diverge from veterinary medicine routinely taught in North American veterinary medical schools or may differ from current scientific knowledge, or both.
AVMA Guidelines 2001

The above definitions demonstrate the varied ideas the word “holistic” invokes. The terms can be confusing. Holistic medicine is a philosophy of how to maintain or regain health. The main idea is that the entire individual (body, mind, and spirit) must be taken into consideration and the underlying imbalance is treated rather than just treating symptoms.

Many people think that homeopathic and holistic are equivalent. If fact, “homeopathic” refers to a specific modality that uses the treatment principle “like cures like.” While homeopathy is holistic, not all holistic modalities are homeopathic.

The word “allopathic” has come to mean conventional medicine while that word was coined by the homeopaths to refer to any intervention that does not use the homeopathic treatment principle. So, since Traditional Chinese Medicine (TCM) uses things like cooling herbs for “heat” conditions, it is holistic but technically is also allopathic.

Integrative is the word that best describes how I practice holistic medicine. In this paradigm, both Western and alternative treatments are applied as the individual case indicates. Holistic-Integrative veterinary medicine indicates that the underlying philosophy of practice takes into consideration the body, mind, and spirit of the patient.

The foundational concept for holistic medicine is that the whole is greater than the sum of its parts. Any illness is a dysfunction of the whole patient, not an isolated event. We concentrate on strengthening the body vs. fighting disease. In this way we treat the individual patient, not the disease. Therefore, we are often more concerned about what kind of patient has a disease vs. what kind of disease a patient has. We treat the underlying causes of disease vs. treating symptoms alone.

Holistic medicine takes into account that the body is equipped with its own pharmacy. Evidence of this is seen in the placebo effect. According to the mechanisms of the placebo effect, 30% of patients will get better if they take a sugar pill… no matter what their problem is. We consider it to be a case of “mind over matter” but what does that really mean? To me it means that the body can heal itself if the right conditions are created. As a holistic vet, I try to create the right conditions for the body to heal itself.

The Body Can Heal Itself

The placebo effect can be quite strong as seen in the case of Mr. Wright. He had been diagnosed with advanced Lymphoma and given a new drug called krebiozen. Immediately he gained weight and his tumors shrank. He later read a newspaper report that said krebiozen was not as good as first though and he started to lose weight and the tumors began to grow. His doctors decided to use give him glorified placebo injections calling them a “new improved batch of krebiozen.” Mr. Wright once again gained weight and his tumors shrank. Unfortunately, he didn’t learn his lesson the first time and he read a new report that said the AMA declares that krebiozen is worthless against cancer. On cue, Mr. Wright’s tumors grew and he died shortly thereafter.

A Dr. Wolf studied the placebo effect in the 1940’s while measuring stomach muscle contractions. He found that if he gave placebo ipecac, he could get a disturbed wave pattern. If he gave placebo atropine, he could get a calmed wave pattern. One particularly good responder, Tom, would actually get nauseated from atropine if told it was ipecac and his stomach was soothed by ipecac if told it was atropine. The placebo effect can overpower the biochemical effects of drugs.

Holistic medicine sees wellness as a dynamic balance. It honors homeostasis and simply nudges the body back to normal. With holistic medicine we see optimal health as something more than simply the absence of sickness. It is a vitality that resists sickness.

Most holistic modalities believe in some kind of energy system. In Japan it is called “Ki.” In China it is known as “Qi.” In India it goes by “Prana.”  The homeopaths call it the “Vital Force” and the chiropractors call it the “Innate Intelligence.” Holistic medicine is guided by the belief that there is a difference between animate and inanimate objects, that there is a vital energy that is responsible for life and well-being.

Have you experienced healing that could not be explained from a conventional point of view?